Just recently, I finished my first ever knitted cowl. It was a very rewarding experience. Not only was it an easy pattern, it was a magical thing of elegance, beauty and sparkle. It was a Dragon Wing Cowl. I got the pattern  from Ravelry. It was designed by Jessie Rayot. I’ll provide the link here: http://www.ravelry.com/patterns/library/dragon-wing-cowl 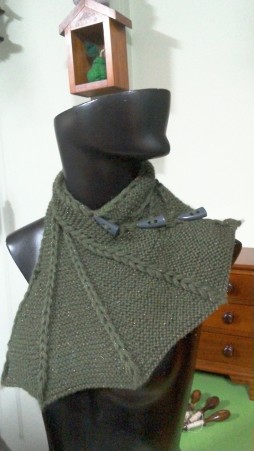 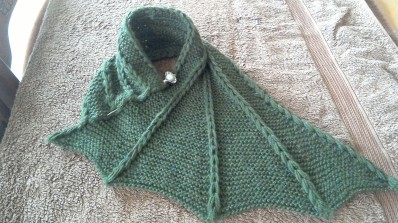 See the pretty sparkles? I used Cascade Hollywood yarn in the colour called Chive. It has built in bling, and it glistens just like I’ve always imagined dragon wings would in real life! It was made for my middle daughter for her birthday, and she loved it, I’m pleased to say. There will be several more of these in my future, I’m sure!

Another new thing was fusible applique… Now, owing to the fact that a lack of foresight had me having three children whose birthdays are all very close together (two of the three being only three days apart) and having a husband off work with an injured leg, I was on a very restricted time-frame to complete the lap quilt I recklessly decided to make for my youngest. I had three days, once the dust settled, and those three days were spent almost exclusively at my sewing machine! Thank goodness I’d already done most of the preparation! I managed to finish it three hours before midnight.

The pattern I chose (because my daughter liked it) was called Daisy Vines by Nancy Mahoney. You can get the pattern from Martingale as part of an ebook called Fast, Fusible Flower Quilts. (link:http://www.shopmartingale.com/fast-fusible-flower-quilts.html)

I added a dragonfly near the bottom for a touch of whimsy. My youngest daughter loves it. I couldn’t wait for the next morning, so as soon as it was out of the dryer I gave it to her! Less than two minutes later….

Yep, worth every fevered, gruelling second! That’s why I do what I do!